The 35th annual Franchise 500, compiled by Entrepreneur.com  reveals the top performers in franchising for 2014. Jumping to the number one spot is Anytime Fitness, a 24-hour gym franchise. The company was ranked #6 in 2013, a remarkable climb considering it first opened its doors in 2002. Based in Minneapolis, the company now has nearly 2,500 units, and boasts 1.9 million members. Over the next 5 years, another 1,500 units are expected to open. The average start-up costs range from $56K-350K.

The top 10 franchises, including average start-up costs are shown in the table below. 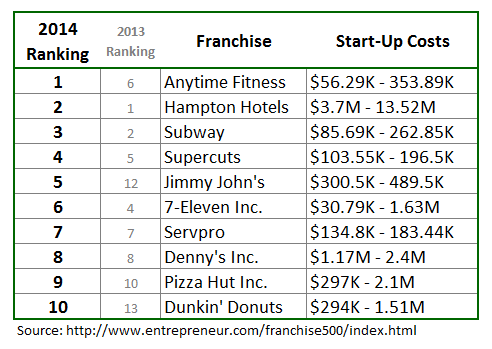 The economic outlook for franchising in 2014 is strong, with the IFA expecting the number of franchise establishments to increase by 1.7% in the United States, reaching an estimated 770,368. Having the right tools to maximize territories for new establishments is a key strategy for success. If you’d like to learn more about our territory mapping software, we’re here to help.