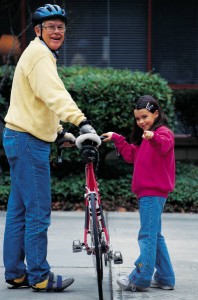 This is a follow-up post to our Bike Sharing article. Bicycling is a great activity. It promotes a healthier lifestyle and provides zero-emissions transportation. In addition to our GeoMetrx data used to create the heat map below, here are some more bicycling statistics:

• Bicycling is the second most popular outdoor activity in the U.S. after running/jogging (Outdoor Foundation, Outdoor Recreation Participation Topline Report 2011)

• The number one reason given for not bicycling is lack of access to a bicycle (National Survey of Bicyclist and Pedestrian Attitudes and Behavior, National Highway Traffic Safety Administration, 2008)

Further anecdotal information reveals that men outnumber women 3 to 1 when it comes to cycling, and those with lower incomes tend to ride bikes more often for utilitarian purposes while those with higher incomes are more likely to ride for recreation. New immigrants to the U.S. ride bicycles more frequently than native born U.S. citizens, and most European countries do not report significant differences in frequency or purpose by gender or income level.

Below is a heat map depicting the percent of U.S. Adults (18+) that have ridden a bicycle within the last year, whether riding a mountain bike or a road bike. The southeast region dispalys the lowest level of activity (yellow) while the rest of the country has greater participation (green).