Even before the advent of Christianity, plants and trees that remained green all year had special meaning in many cultures, particularly during winter. Evergreen boughs were often hung over doors and windows in celebration of the winter solstice. Christmas trees can trace their roots to these ancient traditions, with the earliest written records dating back to the 1500s. In 1510 there is reference to a tree in the market place in Riga, Latvia decorated with roses representing the Virgin Mary. The members of the Merchant Guild danced around the tree and then set it afire. By the 17th century trees in Germany were decorated with 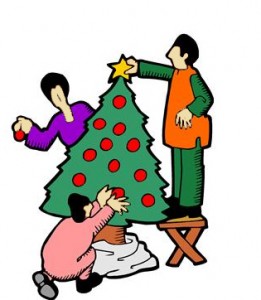 apples to commemorate Adam and Eve Day celebrated on December 24th on the early Christian calendar. Soon after, edible ornaments and lighted candles became popular tree decorations in parts of Europe. By the 1800s, Christmas trees were introduced in the United States, and not surprisingly they quickly morphed from small tabletop decorations to large floor-to-ceiling displays; our innovative bigger, better, faster spirit has been alive and well in America from the get-go!

In 1851, the first Christmas trees were sold commercially in the U.S. and the manufacture and sale of commercial ornaments and other decorations soon followed. The first trees sold were selected randomly from local forests; however, by the early 1900s overharvesting was a serious problem, and the evergreen population was becoming decimated. The first 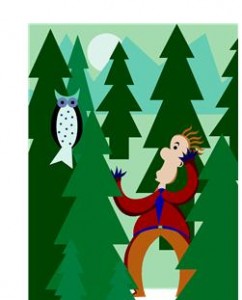 Christmas Tree Farm in the U.S. was established in 1901 in New Jersey. Teddy Roosevelt, the great outdoorsman and naturalist that he was, tried to put an end to the Christmas tree tradition in an effort to preserve the forests. His two sons persuaded him that if managed properly, Christmas tree farming would not be harmful to the environment, and in fact, would support wildlife and ecosystems, which they do to this day.

According to the USDA 2007 Census of Agriculture (conducted every 5 years), there are more than 13 thousand tree farms in the U.S. representing nearly every state and providing an estimated 100,000 jobs. In 2007, these farms harvested nearly 17.5 million trees. The top 5 states are shown in the table below: 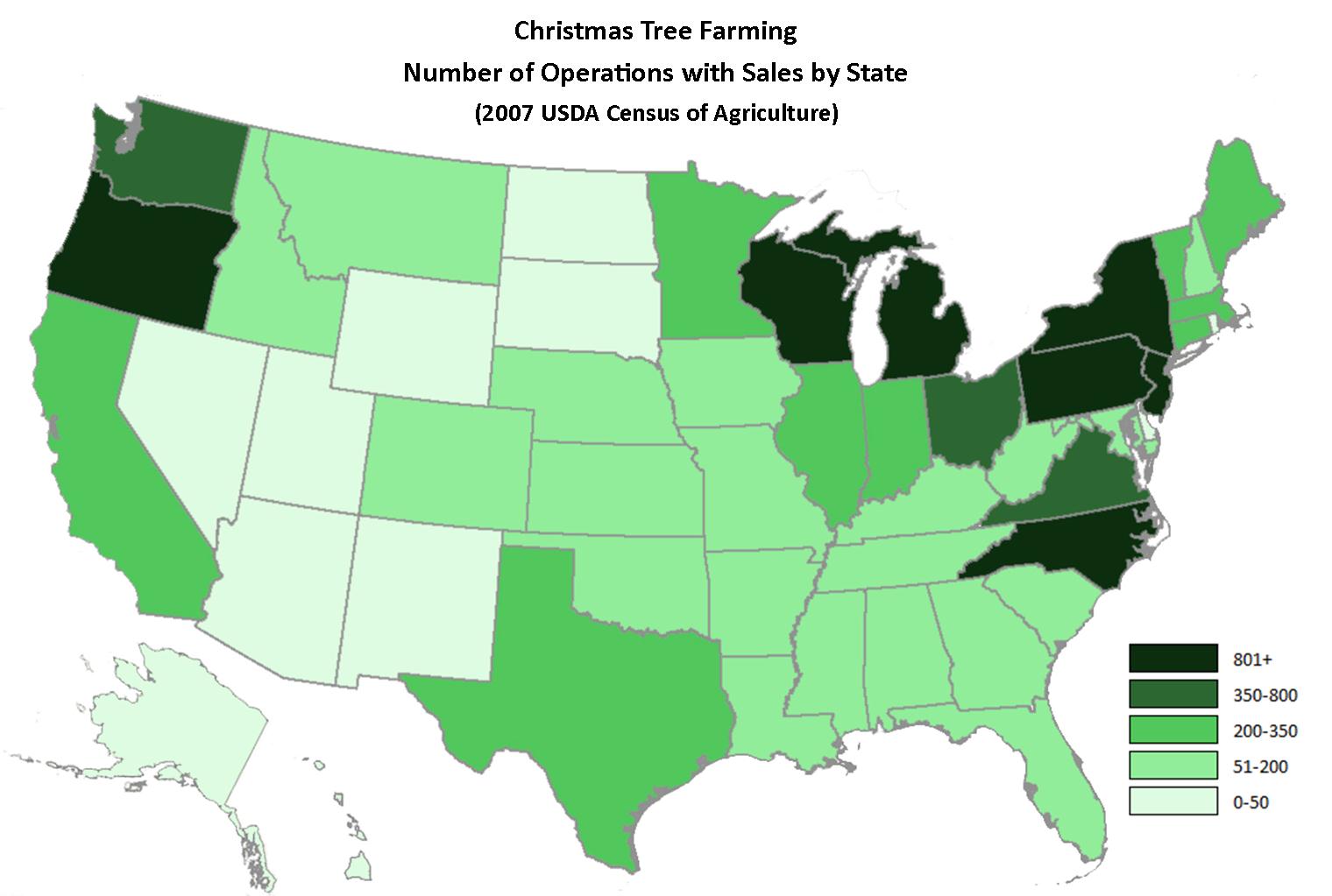 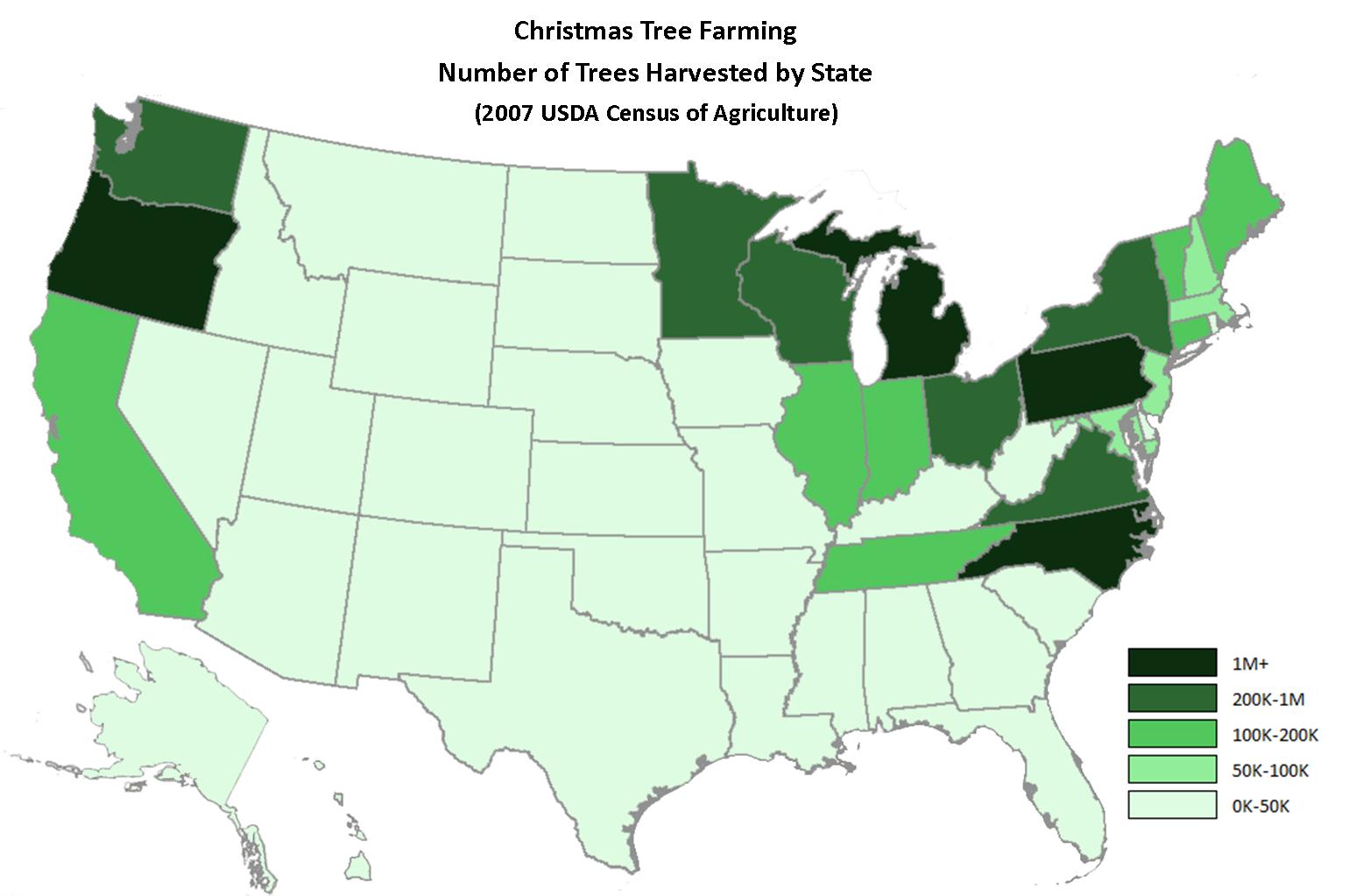 It is estimated that approximately 350 million Christmas trees are growing across the country at this moment. The time it takes for a Christmas tree to mature and reach its ideal height of 6-7 feet ranges from 4 to 15 years depending on location and variety. The average growing time is 7 years. For each tree harvested annually, one to three seedlings are replanted the following spring.

The National Christmas Tree Association (NCTA), representing the Christmas tree industry, conducts an annual consumer poll and estimates 30.8 million trees were sold in 2011, from more than 15,000 farms. The market value of the trees was $1.07 billion, with the mean average of dollars spent resting at $34.87. The vast majority of those trees were pre-cut (84%), and the remainder were harvested at ‘cut-your-own’ establishments (16%). In comparison to real trees, artificial trees accounted for 9.5 million purchases in 2011, with consumers spending $670 million. The average artificial tree lasts for 5 to 7 years before being sent to a landfill, where it could last for hundreds of years, whereas real trees are biodegradable and completely recyclable.

The most common Christmas Tree species are: Balsam Fir, Douglas-Fir, Fraser Fir, Noble Fir, Scotch Pine, Virginia Pine and White Pine. There are more than 4,000 Christmas tree recycling programs for real trees in the U.S., and 93% of consumers participate in these programs each year. Some reuses of the trees include:

• Mulch from chipped branches
• Path and trail cover from shredded trees
• Sand and soil erosion barriers around lakes, rivers and deltas
• Refuge and feeding areas for fish when sunk in private fish ponds
• Living (replanted) trees when purchased with a containerized root ball

Entrepreneurial opportunities in the Christmas Tree industry are abundant from growers to sellers to recyclers. Our GeoMetrx online mapping application is the perfect business tool allowing you to visualize the market landscape, measure your competitors and carve out your niche.