Most of us are familiar with what has become known as the “Groundhog Day Effect,” or recurring / repetitive events, based on the blockbuster film starring Bill Murray and Andie McDowell, but what about a “Groundhog Year Effect?”  Well, brace yourselves, because 2012 may bring us exactly that! 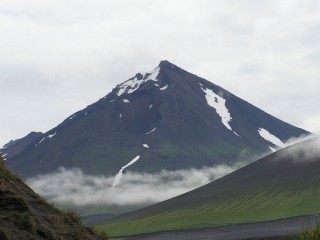 The Aleutian Islands southwest of mainland Alaska is a remote and mostly uninhabited region which conjures up an image of being picturesque and serene, but it is anything but serene.  The chain is formed by a series of more than 300 small volcanic islands, one of which has been making some noise again in recent months.  Mount Cleveland, a.k.a. Cleveland Volcano, has formed its second lava dome in less than six months.  A previous lava dome formed throughout the fall and winter of 2011, and was largely removed by explosive activity on December 25 and 29, 2011.

The December activity did not result in any ash cloud emissions, however, scientists and aviators have raised the Aviation Color Code to Orange and the Alert Level to Watch, as they closely monitor this second lava dome.  An eruption could send an ash cloud more than 20,000 feet above sea level, marking three straight years of major air traffic disruption due to volcanic activity.  Really?  Really!

You might not think that a volcanic eruption in an area as remote as the Aleutian Islands would have much of an impact on us mainlanders, however, it most definitely would.  According to Steve McNutt, a scientist at the University of Alaska Fairbanks, “90% of air freight from Asia to Europe and North America flies over Alaska air space, and hundreds of flights, including more than 20,000 passengers, fly through Anchorage’s air space daily.  If there is an explosion and (ash) reaches high altitudes, it will cause flights to be rerouted and ultimately canceled.” Certainly we all recall the impact of the Icelandic eruptions of Grimsvotn in 2011 and Eyjafjallajokull in 2010.