Daylight Saving Time – Why do we do it? 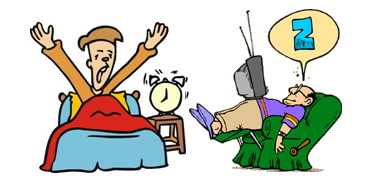 Many of us are spending this week adjusting to the end of Daylight Saving Time (DST), having moved our clocks back one hour this past weekend.  Some of us are able to leap out of bed a little more easily in the morning when the alarm clock blares, with the rested feeling that comes from sneaking that “extra” hour, only to find ourselves battling the eyelids during the nightly news. Soon enough, however, our systems will adjust. In the meantime, we once again question the whole concept of shifting time. When did it begin and why do we do it?

Well, for starters, we aren’t alone. The United States, along with 70 other countries, observe some form of daylight saving, and the practice of adjusting our daily schedules to that of the sun can be traced back to ancient civilizations. The purpose, then and now, was and is to get the best use out of the daylight hours. As the earth rotates around the sun annually, the length of daylight grows and shortens accordingly.

Ben Franklin is credited with the idea of instituting an actual daylight saving program. In 1784, during a stay in Paris, he published an essay “An Economical Project for Diminishing the Cost of Light,” in a local paper.  Despite his experiments with electricity, this essay was not aimed at saving electricity, but rather economizing the use of candles! If you have a few moments, the essay is highly entertaining.

Other proposed plans followed over the ensuing years and decades. World War I brought about the first official observance of a DST plan in Germany, such that fuel could be diverted from providing artificial light and saved for the war effort. Many countries on both sides of the conflict, including the U.S. and Britain, adopted similar plans. However, these were eliminated following the war. It wasn’t until World War II that DST plans were once again used by many countries in an effort to ration vital energy resources.

Here is an interesting WWII historical tidbit about time zone naming conventions from Time and Date.com:

‘President Franklin D. Roosevelt instituted year-round DST in the United States, called “War Time” during World War II from February 9, 1942 to September 30, 1945. The law was enforced 40 days after the bombing of Pearl Harbor and during this time, time zones were called “Eastern War Time”, “Central War Time”, and “Pacific War Time”. After the surrender of Japan in mid-August 1945, the time zones were relabeled “Peace Time”.’

Following the war, the concept of DST was not uniformly adopted in the U.S., and much confusion ensued. States and local municipalities could choose when and if they wanted to participate. Finally, Congress passed the the Uniform Time Act of 1966 and DST was officially established to begin on the last Sunday of April and end on the last Sunday of October. Though still optional, most of the U.S. observes DST except for Hawaii, Arizona*, and the US insular areas of Puerto Rico, the US Virgin Islands, American Samoa, and Guam.

Of course, nothing ever stays the same, and there have been myriad changes to the DST schedule since its inception. In the mid-70s, DST was expanded in hopes of saving energy during the 1973 oil embargo. When the crisis was over, DST reverted to its original schedule. In the late 80s, DST was expanded one month (first Sunday in April). And most recently, in response to the Energy Act of 2005, DST was once again expanded starting in 2007. It now begins on the second Sunday in March and ends on the first Sunday in November.

The biannual ritual of ‘springing ahead’ and ‘falling back’ remains controversial. Besides the struggle to adjust and that one person in your life who invariably misses an event in the spring or shows up ridiculously early in the fall, many complain for other reasons. Ironically, one of the more widely held concerns is that dark winter mornings endanger the lives of children

going to school. Winter hours, however, are STANDARD time, not DST!!!  Others believe that changing times affects humans negatively and that in the initial period following the adjustment there is an increase of car accidents, workplace injuries, heart attacks, and cluster headaches. Why, you ask? Experts report that our circadian rhythms, which control the release of certain hormones that affect our moods, hunger patterns, and desire for sleep, get thrown out of whack by just a one hour adjustment, just think about that ‘jet lag’ feeling you get when you travel to another time zone. Eventually, we adjust, but many argue we should either adopt DST year round, or do away with it all together. What do you think?