Hollywood has long been a source of imagination and awe, incorporating some pretty amazing and futuristic ideas, particularly in SciFi movies. Holographs and other virtual imagery (think Matrix and Avatar) come to mind. And for all of the Star Wars fans out there, you may recall Admiral Ackbar utilizing a digital, touch-controlled globe as he briefed the Rebel Alliance about the looming Battle of Endor.

As technology advances, digital globes are no longer just a Hollywood prop, and while still the stuff of Science Center displays due to cost, that too is changing. Sooner than not digital globes will likely become the norm in classrooms, offices and living rooms everywhere, replacing those static icons of our youth that are frozen in time. How many of us have globes at home from our childhood that are simultaneously useful and useless – land forms and the lat/long system remain the same, but so many country boundaries have changed in the past 30-50 years, especially in Africa and the Balkan Peninsula? Imagine a dynamic globe that can display not only a traditional view of the earth, but so much more, and with the most current information available.

The NY Times recently reported on digital globes and the varied information these spherical display screens can exhibit:

“Controlled by a keyboard or tablet computer, a digital globe can toggle between familiar, static images, like the world’s political boundaries, topography or vegetation. It can animate complex phenomena, like the formation of weather systems, the effect of global warming on wolverine habitats or the annual pulse of sea ice. It can display the surface of the moon, the churning azure cloudscapes of Neptune or the celestial globe — the night sky. 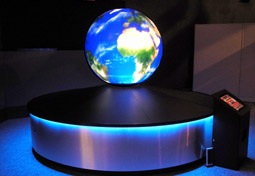 There are still some challenges to overcome. When trying to map the earth cartographers have been challenged for centuries to display a round planet as a flat image with as little distortion as possible. Conversely, digital globe techies have to project flat images undistorted onto a round screen while maintaining equal brightness and focus. Another challenge to overcome is optimizing the placement of the projectors (whether internal or external) and the mounting base so as not to cast shadows or block portions of the globe, a particular problem for the South Pole on many current models. The next biggest challenge is cost: prices currently range from $21,000 to $43,000. Through improvements in technology, market leader Global Imagination, is developing a much lower cost model aimed at educational institutions which it hopes to offer for approximately $2,500 in the next one to two years.

China is leading the way in the use of digital globes as a teaching tool in social sciences like the geography of religion, language and history. Global Imagination says shipments to China account for 80% of sales. Other common subjects include earth sciences and astronomy, however, many organizations are beginning to use the spherical screens as a generic interface to teach art, math and more. Lawrence Mascotti, director of the planetarium at May High School in Rochester, Minn. believes the digital globe overcomes the learning challenges some students face through more traditional text book studies, “It’s simple; the mind follows the eye.”

Corporations and government entities have much to gain from the use of digital globes beyond their “oh-wow” impact. Digital globes can be used to display sales data, resource allocation, military deployments, facilities, distribution networks, emerging weather threats, transportation, and much more. Just imagine when these products reach a price point where they are a common feature of every home. Global Imagination CEO Mike Foody said the iPad has set the bar high for digital displays, “but flat.” Let’s hope they get a-”round” to making this new technology obtainable for everyone very soon.