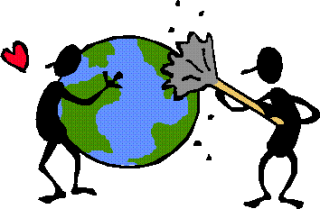 Earth Day 2012, which is observed each year on April 22nd, took place this past weekend and was marked by celebrations around the world. Earth Day is an opportunity for environmentally conscious groups and organizations to raise ecological awareness locally, nationally and globally. Even NASA made the most of the day by unveiling an updated version of its sensational photo gallery, “State of Flux” on its Global Climate Change website, for which it won a Webby Award-Science in 2010.

The images, taken mostly from space, offer a visual tour of the transformations that have taken place on our ever-changing planet over periods of time ranging from just days to centuries. Images are paired together to show the before-and-after impact of change. More than 160 comparison views are posted depicting extreme events, such as wildfires and floods, the effects of the retreating glaciers, our human impact including urban expansion and population growth, and more. The images are organized by categories and can be sorted and searched.

Of course, we think the best new feature of the upgraded site is the map view, which puts the images in geographical context. This interactive feature allows visitors to select a region or zoom in to a specific location to see where specific changes are occurring. Below is an example of one the high-resolution image sets that can be shared or downloaded:

Delta restoration, Louisiana Wax Lake Delta, Louisiana. Left: January 13, 1983. Right: January 2, 2011. The delta, where the Atchafalaya River flows into the Gulf of Mexico, was formed by sediment following the construction of a canal through Wax Lake in 1941. Since Hurricane Katrina in 2005, the delta has served as a model for restoring wildlife habitat and protection against storm surge in the Mississippi River delta region. mages taken by the Thematic Mapper sensors aboard Landsat 4 and 5. Source: USGS Landsat Missions Gallery, U.S. Department of the Interior / U.S. Geological Survey.

Amber Jenkins, editor of the Global Climate Change website, who established the gallery in 2009, says, “Seeing our planet from space gives us a global view that we can’t get elsewhere. It underscores how fragile and interconnected our planet is, and how it is constantly changing. With this new version of the gallery, we want people to be better able to immerse themselves in the images, and gain that sense of perspective.” For more on NASA’s Earth Science activities, visit: http://www.nasa.gov/topics/earth/index.html.