The popular vote is pretty simple to understand – every vote cast counts. The presidential candidate with the most votes is the winner of the popular vote. But that does not mean that candidate will win the presidency. For that we have to wait until the Electoral College votes. What exactly is the Electoral College? It is a group of 538 electors that represent each of the states as well as Washington D.C. The number of electoral votes per state is equal to the number of U.S. Representatives and U.S. Senators for each state. Washington D.C. currently has 3 electoral votes as determined by the 23rd Amendment.

Long before the popular vote takes places on Election Day the Electoral College for each party is chosen. Each state has its own process for choosing Electors, though generally they are nominated at their State party conventions or by a vote of the party’s central committee. Electors often have a track record of service and dedication to their political party and can be anyone including general members, officials, party leaders, or even people with a personal or political connection to the presidential candidate.

On Election Day when we go to the polls and cast our vote for president, we are actually voting for the Electors for that candidate in our state. In that sense, the popular vote in each state does count (except in Nebraska and Maine) such that the winning candidate’s party is awarded all of that state’s electoral votes. In Nebraska and Maine, the state winner receives the two senate-based Electors, and each district Elector is determined by the popular vote within that district.

Once the nationwide popular vote is completed, the Electoral College meets in mid-December and casts its votes for President and Vice President and the votes are tallied by Congress. It is not until this time that the election results are actually official. While there is no Constitutional provision or Federal law requiring Electors to vote for their party’s candidate, it is generally expected that they will, and some states do require that the Elector vote according to the popular vote. Over the years there have been some Electors who have not voted as expected, but nothing significant enough to have changed the outcome of an election. Likewise, no Elector has ever been prosecuted for failing to vote as pledged.

6th President  – John Quincy Adams (Election of 1824): won neither the popular vote nor the electoral vote – with four candidates in the running it is the one and only time in our history so far, following the passage of the 12th Amendment, in which the election was determined by the U.S. House of Representatives since no candidate managed to receive a majority of the Electoral votes.

19th President – Rutherford B. Hayes (Election of 1876): one of the most contested elections in our history, Hayes not only lost the popular vote, his opponent, Samuel J. Tilden, actually received a true majority (51%).  Twenty (20) contested Electoral votes from 3 states (Florida, Louisiana, and South Carolina) were awarded to Hayes after an intense legal and political battle earned him the presidency by one Electoral vote (185-184).

23rd President – Benjamin Harrison (Election of 1888): with a difference of just under 100,000 votes, Harrison lost the popular vote to Grover Cleveland, but carried two key swing states, with a margin of 1% or less, and thus secured enough Electoral votes to win the election (233-168). Had Cleveland won those two states instead the results would have been  219-182 in favor of Cleveland.

42nd President – George W. Bush (Election of 2000): the first election within our lifetimes (unless you were 112 or older at the time) in which the winning candidate did not win the popular vote (47.9% vs 48.4%, a difference of just 0.5%). The 27 Electoral votes in Florida were hotly contested with the Al Gore Campaign demanding a recount. Still hotly contested in some circles, each side has reason to believe they were the true winner of the Florida Electoral votes.

If you’d like to see the results of all the U.S. Presidential elections, along with maps showing the voting results of each, visit www.electoralmaps.org.

Another fun and interactive map we found is hosted on the U.S. National Archives and Records (NARA) site which allows you to make your own predictions for the 2012 Election. No matter what your prediction, be sure to vote, because every vote can and does matter. 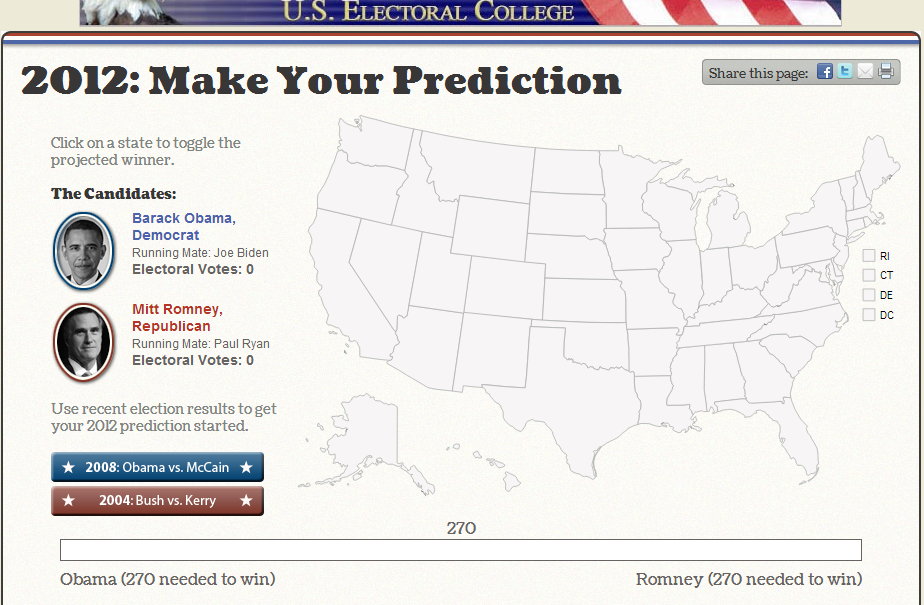