This past weekend I had the pleasure of making one of those late Sunday night runs to the airport to provide a ride home for my husband. Now, I couldn’t really say no, and it certainly was cheaper than leaving a car parked at the airport all week, but, ugh, it was late! And then the dreaded text message… the flight is delayed! No! How long? Why?

Air travel has to be one of the most frustrating activities on the planet. One of many factors that makes air travel frustrating is the LACK of information. It’s much easier to deal with a delay if you know the cause. Being left to sit and wonder is maddening.  Once my husband arrived at the gate for his flight he asked about the delay. The plane was coming from San Francisco he was told, and delayed due to weather. Weather? Really? The first thing I had done was check the weather when I received the text. There was no weather at SFO. Maybe it was fog? No, I tracked that down too, it was not fog.

I suppose it’s just easier to blame the weather, people won’t question that right? The airlines certainly don’t want to take the blame for a late crew or a mechanical problem (both crossed my mind as being the real cause). Swell! I never like to be connected to a flight that requires repairs to be done on the “fly!” With my ever-curious nature in full swing I decided to Google airport delays, and in so doing, not only did I find the real truth behind the delay, I also discovered a nifty little website tool with a map and everything!

The FAA hosts a website titled Flight Delay Information – Air Traffic Control System Command Center. Each airport is represented by a dot. The dot is color-coded denoting the status of each airport. Green represents general arrival/departure delays of 15 minutes or less; yellow 16-45 minutes; and red 45 minutes or more. And then there is orange, which means that flights are being delayed at their originating airports due to delays at their destinations. 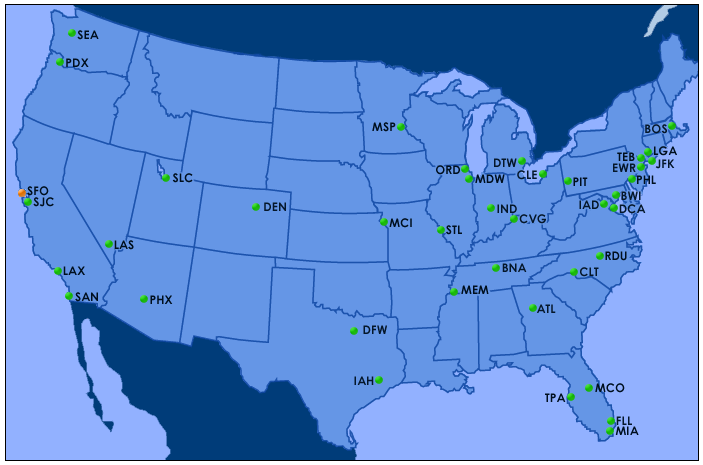 On Sunday, when I discovered this handy tool, every dot on the map was green, except SFO, which was orange! As it turns out, SFO was taking advantage of the lighter weekend air travel to do construction work on the taxiways. Thus, they were holding flights at their departure points up from 45 to 90 minutes. Oh yay, lucky me! At least it was better than worrying about what piece or part of the aircraft was faulty, or if the crew was suffering a nasty hangover!

The FAA map is interactive, allowing you to hover or click on the dots for more information about the delay. Additionally, while the main map only depicts major airports, you can select a region of focus, lest you should think they slighted the regional airports! 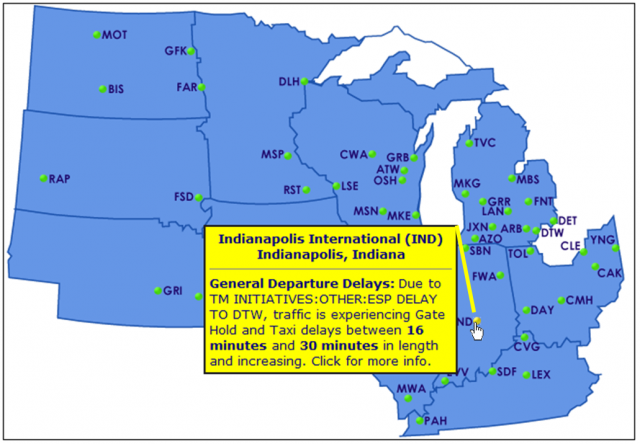