Everyone naturally sees things from their own personal perspective, and therefore, we are each the ‘center of our own universe,’ right? When it comes to mapping, this could not be truer. When you enter an address in say, Google Maps, what does the tool do? It centers the map on that point, of course! No matter where you are, if draw a radius ring around yourself you will be at the center and equidistant from any random point on that ring, at least the way the crow flies anyway.

And what, exactly, determines direction? Well, we have the magnetic North Pole, so that is certainly helpful, but how did it end up that on a map or a globe the North Pole is situated at the top? You might be surprised to know that has not always been the case. The convention came a few centuries ago when European navigators started using the North Star and the magnetic compass as guides. Prior to that, some of the earliest maps display East at the top; and thusly the use of the word orient (of the east) also came to mean aligning or positioning something relative to another specified position. Another way to determine direction is by the rising of the sun; from east to west.

What if our predecessors chose to place north at the bottom of the map? What if east and west were simply reversed? What would our maps look like? What if Europe wasn’t the center point of flat world maps? Well, many cartographers have pondered just such questions and have drawn maps from different perspectives or different centers. Here are just a few of our favorite world map perspectives: 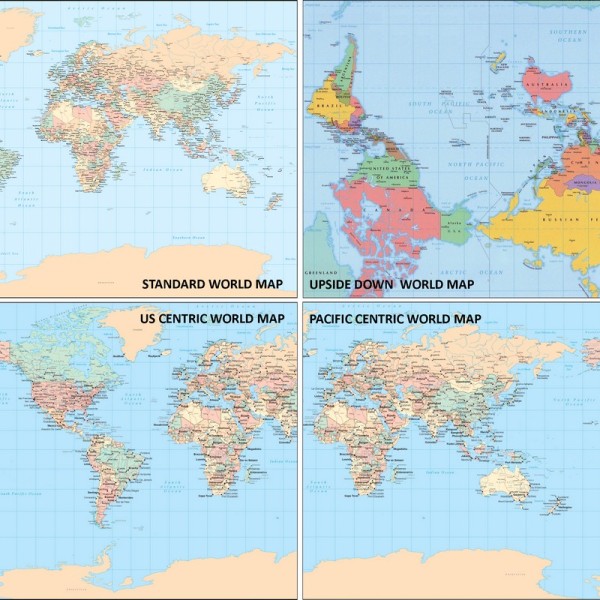 There is actually quite a bit of history about maps and directions, which vary from culture to culture, but more on that in another post!

ge·o·cen·tric (jēōˈsentrik); adj. — having or representing the earth as the center, as in former astronomical systems.

e·go·cen·tric (ēgōˈsentrik); adj. — thinking only of oneself, without regard for the feelings or desires of others; self-centered.