Looking for a fun book to read this summer? We’ve discovered a must have for any true geography buff, “The Largest U.S. Cities Named After a Food: and Other Mind-Boggling Geography Lists from Around the World” published by Santa Monica Press.  The book contains more than 500 lists of geographic trivia including topics such as ‘Strange U.S. Place Names’ (Boogertown, Buzz, Tightwad, etc.); ‘Ten Largest Countries without Railroads’; ‘Most Extreme Locations’; ‘Ten Most Populous Countries without a McDonalds’; and ‘Most Tomatoes per Capita’, just to name a few.

The namesake list of the book along with its intro is as follows:

Despite America’s love affair with food, not that many cities are named after food. Fruits are the most commonly used food in city names, while meats are rarely used. Somehow, “Porktown” just doesn’t seem like an appealing place to live. 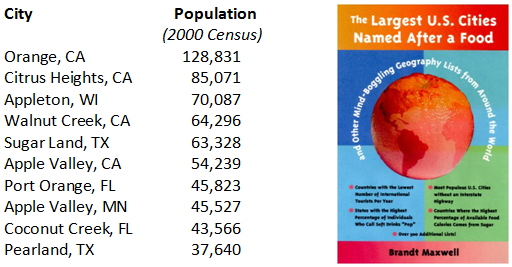 This book was published in November 2004, and as statistics are very fluid, some of the lists, such as countries without any FM radio stations, have become obsolete.  All 192 independent nations are now reported to have at least one FM station, even Vatican City, the smallest nation in the world.  Other lists, such as weird place names are less likely to change. The author, Brandt Maxwell, regularly updates his website and adds bonus lists available only online. The most recent list was added on May 8, 2012 and catalogs ‘Countries That Don’t Use Coins.’ None are in the Americas, but can you guess them before following this link for the answers? And remember to check in again in a few days when the next online mystery list is posted on June 16th.