High Speed Rail: A Vision for the Future

High Speed Rail: A Vision for the Future

The U.S. owes much of its early growth and prosperity to the railroads, and if the visionaries of our country persevere, they may once again regain their prior glory attained during the “Golden Age” of railroading.  Railroads enjoyed the height of their popularity for more than a half-century during the 1880s to 1920s, before other modes of transportation, such as automobiles and airplanes, began to compete in moving goods and people across vast distances.  According to American-Rails.com, “…1916 saw peak mileage at over 254,000 [miles of track] and railroads held virtually 100% of all interstate traffic, both passenger and freight.”

By the end of WWII, the railroad industry was in serious decline, and by the time the 1970s arrived, railroad operators had to cut back so severely that the trains, and even the tracks themselves, were in serious disrepair. Many of the famous railroad companies collapsed during this era, and out of the ashes arose what is now Amtrak (National Railroad Passenger Corporation), a government owned corporation.  The industry was deregulated 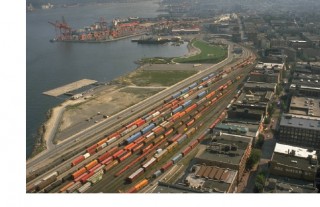 in 1980, and has slowly been making a comeback ever since. Today, the industry is experiencing a rebirth as many industry leaders and politicians are pushing for the advent of a high-speed US rail system equivalent to those now operating in the European Union, and parts of Asia.

While our passenger system is lacking, our freight rail system is widely held to be the best in the world. The freight rail system, surprisingly perhaps, is running out of capacity as the demand has surged in the last decade to levels that have not been seen since WWII.  Other factors contributing to the revival of the railroad industry are:

The challenges facing the industry are great, yet many believe they can be overcome.  These include the varying interests of policy-makers, land rights, the financial obligation of project development and construction, and the lack of connecting local public transportation in many metropolitan areas. Visionaries see the need today to build a passenger rail system that can free us from our utter dependence on the automobile tomorrow. America has long been a world leader and it is, therefore, somewhat baffling that the installation of a high speed rail system is not a higher national priority.

Passenger routes in the US, both current and proposed, are a patchwork of many private regional systems. California is in the midst of long-term planning to build a high speed rail corridor through its central valley that will connect northern cities to southern cities with trains that will travel at 200mph. The northeast is host to the fastest trains currently in operation with the U.S. Amtrak’s Acela service traveling from Boston to Washington at speeds up to 150mph. Improvements are planned that will take the top speed to 160mph.  In comparison, most high speed trains in Europe travel at approximately 110 to 185mph.  The Chinese Shanghai Maglev Train, operating via magnetic levitation, has a top speed of 268mph.

European rail companies are wrestling one another for future control of the industry and the lion’s share of billions in profits, while back in America, we continue to argue whether high speed rail should even exist. One organization, US High Speed Rail Association, an independent, nonprofit 501(c)(6) trade association is focused on “advancing a state-of-the-art national high speed rail network across the country.” The organization hopes to “organize and mobilize the industry with a shared vision for a 21st century, 17,000 mile national high speed rail system built in phases for completion by 2030.” The map below depicts their vision.

While the future of railroads in the US is unknown, one thing is certain – how people will travel in the future impacts long term strategies for many businesses. In the heydays of Route 66, many businesses popped up overnight along the popular east-west corridor. However, as the new Insterstate Highway System eventually bypassed the road, many businesses either closed down or relocated. A national high speed rail system will certainly change the face of America in much the same way, disrupting traffic patterns businesses currently rely upon.

Businesses in large cities with well-established public transportation will fair better than those in metropolitan and suburban areas that are predominantly car-dependent. As local markets develop public transportation to support high speed rail traffic, consumer shopping behaviors will change as well. People who rely on public transportation tend to shop more often and purchase smaller amounts of goods compared with people living in suburbs and driving large vehicles who tend to make fewer trips but purchase greater amounts.