Fall is in the air and our thoughts turn to a bountiful harvest table. The leaves have turned beautiful and brilliant colors and now gently drift downward landing softly and creating nature’s most amazing carpet. In 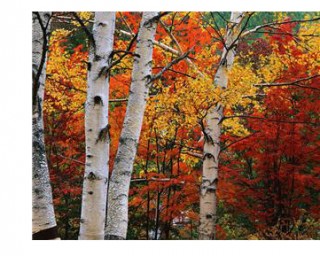 yards everywhere the leaves are raked into piles readied for composting or burning. In the forest they remain undisturbed except for the wildlife foraging among them… and those hunting the foragers.

Hunting, while once a necessary means of survival, is now predominantly considered a recreational activity or sport, albeit a hotly debated one. There are two distinct and strongly opposing sides. Hunters believe that we are part of the food chain and that the animals have lived a better and freer life than those raised in captivity. Hunters are living off the land like their ancestors; hunting one’s own meat, it is argued, is no different than maintaining one’s own garden, and is considered a healthier dietary source in place of purchasing domesticated meat from the butcher or industrially-farmed vegetables from the grocer. The loudest argument against hunting is animal rights, but this article is not about the debate, and rather about the hunting industry itself.

Hunting is a $34 billion industry, according to the 2011 National Survey of Fishing, Hunting, and Wildlife-Associated Recreation (FHWAR). The survey is conducted every five years. A preliminary report was released in August 2012, and the final report is due out 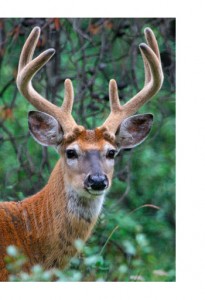 later this month. The survey gathers data on participation and expenditures for hunting, fishing and other wildlife activities including photography, observation, feeding (birds and other small animals), and maintaining natural areas for the benefit of wildlife.

In 2011, more than 6% of the population, 13.7 million Americans (16 and older) went hunting. Another 1.8 million Americans, aged 6 to 15, also hunted. Participation increased 9% since 2006, when there were a reported 12.5 million active hunters in the U.S. Big game, such as elk, deer and wild turkey, is the most common prey which drew 11.6 million hunters, 85%, in 2011. One-third, 33%, hunted small game including squirrels, rabbits, quails and pheasants. Less than one-fifth of hunters, 19%, went after migratory birds: geese, ducks, doves, etc. Fewer yet, just 16%, hunted other game such as coyotes, groundhogs and raccoons. 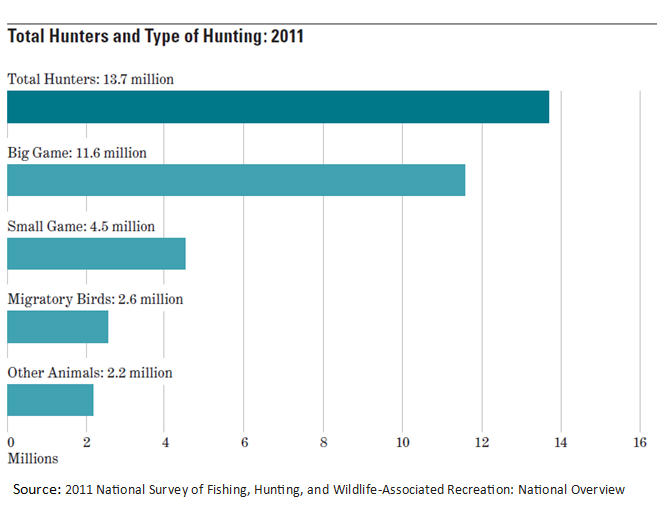 It is estimated that the hunting industry supports more than 1 million jobs in the U.S.  The major industry segments include: Manufacturing and Distribution; Gear and Equipment Retail Sales; Industry Services (guides, clubs, ranges, private and commercial game 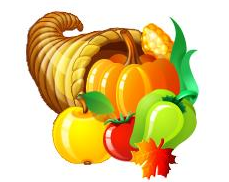 reserves, trade shows, etc.); Publications and Associations. There is no single industry giant, though some retailers are growing rapidly such as Bass Pro Shops, Cabella’s and Gander Mountain. Opportunities for entrepreneurs and franchisors alike are plentiful.