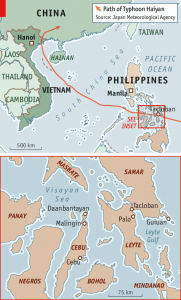 Weather around the world continues to be wild and unpredictable. Our hearts go out to everyone in the Philippines affected by super-Typhoon Haiyan (Yolanda) that made landfall on Nov. 8, 2013. The death toll has reached 4,000 and continues to climb. An estimated 9 to 13 million people have been affected by the storm in 44 provinces, 536 municipalities and 55 cities. The hardest hit city was Tacloban on the island of Leyte. The storm is one of the most powerful ever recorded.

The Western Pacific has the highest frequency of tropical cyclones (typhoons) north of the equator and experts fear more storms of similar magnitude are likely in the future. According to the Asian Development Bank, while the average number of cyclones per year has not risen significantly, the severity of individual events has increased due to rising temperatures of both the air and sea. The impact of damage from storm surge has increased as well given rising sea levels in the region.

In the aftermath, and from halfway around the world, my daughter asked what exactly was a typhoon. I explained to her it was just a different name for a hurricane, which got me to thinking, why are they different, and how does one know? I went searching for answers and found this graphic from David Simmer II’s Blography site.

David had this to say about his map: “It’s not a perfect map, of course… but it basically boils down like this: Historical British colonial regions like India and Australia use “Cyclone.” The Americas use “Hurricane.” Asia uses “Typhoon.” There are variations on all those. And, of course, local languages have many different names in their native tongues.”  The NOAA defines the location of these storms similarly: “In the Atlantic and Northeast Pacific, the term “hurricane” is used; a similar disturbance in the Northwest Pacific is called a “typhoon” and “cyclones” occur in the South Pacific and Indian Ocean.”

All these storms are initially referred to as tropical storms once winds reach a sustained 39 mph. The tropical storms are then given an actual name by the World Meteorological Organization, using forenames familiar in each region. The Philippines has its own naming system as well, hence Haiyan to the world, and Yolanda locally. Tropical storms become either a hurricane, typhoon or cyclone when winds reach a sustained 74 mph. As the storms escalate they can range from Category 1 (weakest) to Category 5 (strongest), except in Australia which has its own system for categorizing strength.

But back to the question… Why the different names (hurricane, typhoon, cyclone) for these storms? Well, it comes down to the same thing: location, or more precisely the regional influence on the local language. In a nutshell, here is the basic etymology of the three storms from dictionary.com:

Hurricane – Spanish (1545-55) huracán, and the Taino (an extinct Arawakan Indian tribe of the West Indies) hurakán

While these storms are the same in cause and nature, there are some other interesting differences among hurricanes, typhoons and cyclones: 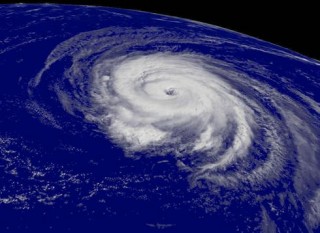 – The direction of the rotation of the storm depends on whether they occur north or south of the equator – clockwise if north and counter-clockwise if south.

– Frequency of northwest Pacific typhoons is the greatest with an average of 27 storms per season, while the average number of Atlantic hurricanes per season is 11.

No matter what you call them or where they occur, these storms can pack a real punch and are very dangerous. The power of Mother Nature is awesome and should never be underestimated.