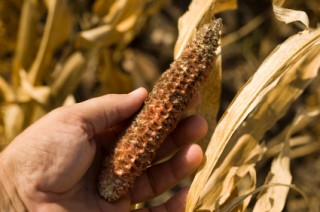 Mapping data is a powerful tool, not only allowing us to analyze what has occurred, but helping us predict future outcomes.  A perfect example is the use of satellite data by the U.S. Department of Agriculture-Agricultural Research Service (USDA-ARS) to map plant stress in conjunction with drought.  Drought induced plant stress is caused when soil moisture falls below sufficient levels. Early results of the research being conducted with the satellite images shows the data may provide some early warning potential, improving existing forecasts that predict drought out to weeks or months. While this won’t stave off drought it may give farmers a chance to better prepare by purchasing supplemental feed for their livestock in advance, or adjusting other crop-related and business decisions to dampen the blow of an impending drought.

The satellite images measure vegetation temperature, and hotter plants are an indication of limited water in the soil. Plants cool themselves in much the same way humans do. The roots extract water from the soil and deliver it to the leaves. The water is then ‘sweated’ out and the process of evapotranspiration from the leaf surfaces provides a cooling effect. 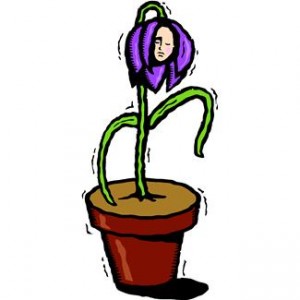 When access to water is limited this process slows and the leaf or canopy temperature of the plant increases. If humans get dehydrated, we sweat less and our internal temperature rises as well. This change in plant temperature is detected by thermal sensors on the NOAA’s (National Oceanic and Atmospheric Administration) geostationary weather satellites. The satellites can detect early warning drought conditions in areas where radar networks are sparse, and the images can be scaled to individual fields. Wow! 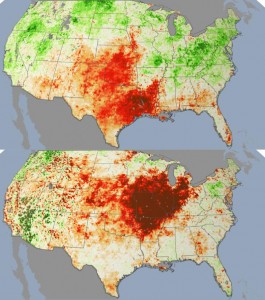 The research to date indicates that plant stress is apparent on the satellite vegetation temperature maps before the more tell-tales signs, such as wilting, are visible in the plants themselves. The drought of 2012 has been one of the most severe and extensive, record breaking events in the past 25 years. By July, farmers across the Midwest and Plains watched as their crops wilted and died following unusually low rainfall and sustained above average high temperatures. The maps began showing signs of water depletion and plant stress as early as the summer of 2011 with the warming of the vegetation.

An animation of the plant stress maps compiled by NASA shows how drought has progressed across the U.S. over the last three years from January 2010 through September 2010. The green areas indicate healthy plants and above average moisture in the soil while the red areas indicate stressed plants and below average moisture. Click here to see the animated images and listen to the expert analysis.

The maps are one of many analytical tools at our disposal, and certainly should not be overlooked. How can mapping your data help predict the future of your business? Call us at GeoMetrx, 1-888-848-4436, or schedule a demo today to learn more about the power of mapping.