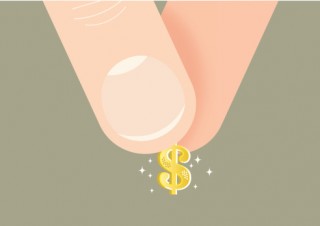 In President Obama’s 2014 State of the Union address, minimum wage was once again a hot topic. Obama urged local leaders not to wait for Congress to act, but rather to take matters in their own hands and raise the minimum wage to $10.10, well above the current $7.25 federal minimum wage under the Fair Labor Standards Act (FLSA).

In December 2011, we published a minimum wage post highlighting eight states raising their minimum wage as of Jan. 1, 2012, along with a tally of how the states stacked up against the federal minimum. Since that time, minimum wage increases have continued to occur across several states, many of them the ten states that adjust the rate annually, based on the Consumer Price Index, to account for inflation. Here is how the state counts stack up from 2011 to 2014. 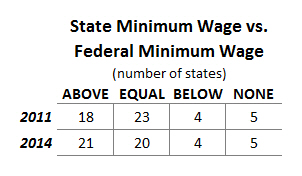 Additionally, the U.S. Department of Labor has an interactive map for tracking the minimum wage in each state as well as other U.S. jurisdictions, as shown in the image below. 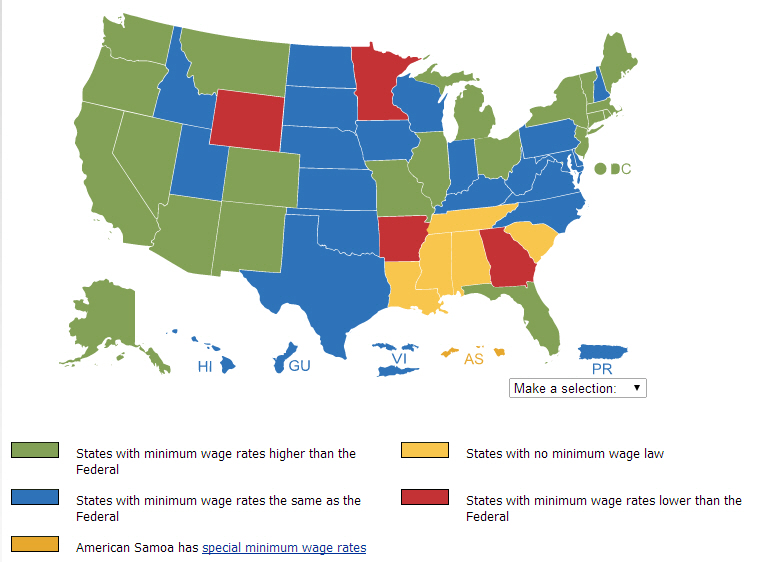 While the great debate rages on about the pros and cons of raising the minimum wage, there is plenty of evidence that the impact of increasing wages effects many aspects of the economy. It puts extra dollars in consumers’ pockets which historically leads to increased consumer spending which leads to job creation. Wage increases stimulate local economies. At the same time, higher wages also impact small businesses that rely on a minimum wage workforce and cannot directly absorb the wage hikes without passing costs on to consumers or reducing workforce.