Hollywood has long held a special place in the hearts of Americans, and watching movies has become one of our most beloved pastimes. A good movie catapults us into another world and allows our imaginations to run free, creating an almost hypnotic-like state of being. For a couple of precious hours we can leave the realities of our own world behind whether sitting in a darkened theater or in the comfort of our own living room. Regardless of how we obtain access to movies our hunger for them is likely to never be satisfied, as we’re  always anxiously awaiting our next escape.

It’s amazing to think how far the movie industry has come in such a short time – just a little over a century – and it boggles the mind to imagine where it will be in another century.  The changes in the movie distribution marketplace are gradual as one technology eventually replaces another, such as “talkies” signaling an end to the Silent Era with the 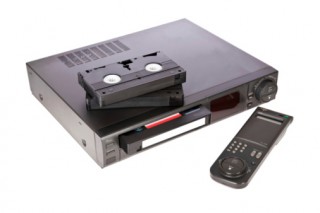 release of The Jazz Singer in 1927. Next, televisions began to appear in living rooms little by little, creating the first real competition for the big studios. By 1962, more than 90% of American homes had television sets, pushing the motion picture industry to create more spectacular entertainment in order to keep audiences filling the theaters.

In 1976, JVC marketed the first VHS (Video Home System) device and forever changed the motion picture industry. Audiences could now rent movies from the myriad of neighborhood video stores that popped up overnight, and gave rise to industry giants such as Blockbuster, Hollywood Video and Family Video. The VHS era had nearly a 30 year run before being outmoded by digital technology. The last major motion picture on VHS was A History of Violence, released in 2006. Digital technology has swept away the industry, and ironically, the first major motion picture to be released on DVD (digital video disc) was Twister in 1997.

The digital era offers a wide variety of options in addition to DVDs for the home audience including:

Americans have become accustomed to convenience and control, and the digital era of home entertainment provides both in abundance. Online streaming has come a long way in the past few years and continues to be the wave of the future. Full-length, high resolution movies can now be downloaded in just a few moments to smartphones or any other electronic device – wow!  We can watch nearly anything, anywhere, anytime.

Despite instant access, DVDs are still a major aspect of the industry and distribution channels are the name of the game. DVDs can be rented from a video store, a stand-alone kiosk or through a mail order subscription. Brick and mortar stores are becoming dinosaurs. While physical stores can offer a large variety both locally and in-network, the overhead cost makes them much less competitive with newer distribution channels. Video rental giant, Blockbuster, continues to struggle in the brick and mortar format.  At its peak 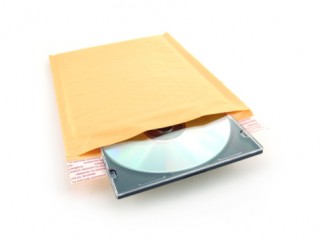 in 2004, there were more than 9,000 stores around the world; now less than 500 remain. New owners, Dish Network, plan to keep these stores operating as long as they remain profitable.

Netflix and similar companies dealt the first blow to brick and mortar stores by offering mail-order subscriptions at a much lower per movie cost. Mail-order rentals allow customers to ‘rent from home’ at their convenience by selecting movies online, waiting for delivery and simply returning the movie in a pre-paid envelope when finished viewing. Many of these subscription services offer a variety of monthly plans with different levels of concurrent rentals and exchanges. The biggest advantages of these programs are low cost and a large inventory of movie selections, while the biggest disadvantage is waiting for delivery. 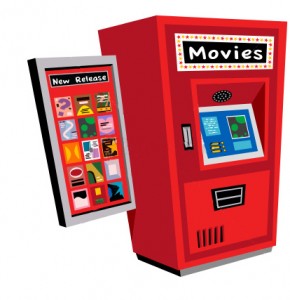 DVD kiosk rentals delivered a second  blow to brick and mortar stores offering the advantage of both lower prices and increased convenience. Industry leaders such as Redbox, with its nationwide network, as well as regional giants such as DVDXpress, have greatly penetrated the market. DVD rental kiosks can be found in variety of locations including gas station/mini-marts, grocery stores, restaurants, and more. Customers can select and rent movies at any kiosk through an interactive display or movies can be selected and reserved online, guaranteeing the movie will be available at a chosen location until a specified time. The disadvantages of kiosks are two-fold. Kiosks have a limited amount of storage and therefore offer a reduced inventory selection. As a result kiosks run the risk of being out of stock of specific titles, especially popular new-releases.

The DVD Kiosk business is still booming despite the competition of online streaming and instant downloads. Entry into the market is fairly low cost compared to other start-ups which require more space and overhead. Check out this infographic from www.onlinedegrees.com for a more detailed review of the DVD rental vs. online streaming landscape. The GeoMetrx online territory mapping application can assist new and existing entrants into the market with territory mapping and management as well. Contact us for a demo today at 1.888.848.4436.