New Beach Front Property? If all the ice melted…

When it comes to global warming, or rather the new, more PC term, climate change, there is one main theme – rising temperatures of both land and sea. While the debate rages on whether this threat is real or perceived, or whether it’s human induced or a natural geological cycle, one thing is certain, the earth is changing. But then it always has been and likely always will,  and this keeps our scientists very busy indeed!

In the September 2013 issue of National Geographic, a map was created in response to the question many of us have asked in recent years – “What if all the ice melted?” Well, for starters, the sea would rise an estimated 216 feet, and the most dramatic effect in the U.S. can be observed in Florida… er, wait, there would be NO Florida!!! Along with that, we would lose much of the rest of the Gulf Coast, as well as the entire Atlantic seaboard, San Diego, and more. 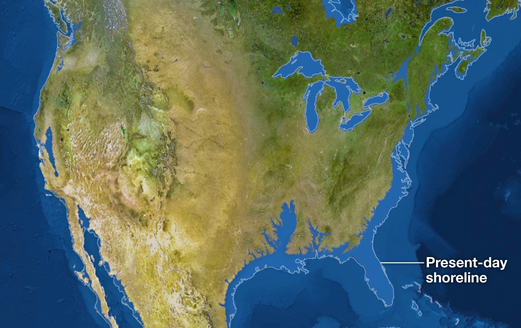 But before those of us slightly inland from our current shorelines reassess our property values, it’s going to take awhile to melt the more than five million cubic miles of ice on Earth. According to National Geographic, “some scientists say it would take more than 5,000 years to melt it all. If we continue adding carbon to the atmosphere, we’ll very likely create an ice-free planet, with an average temperature of perhaps 80 degrees Fahrenheit instead of the current 58.” To see more, click on this link, or on the map above to view the affect on each of the continents.