Online Shopping – How Widespread is it?

There is little evidence in America, and even the world for that matter, that we will outgrow this computer and Internet fad-thingy.  Instant and constant access to information has changed, and continues to change, the way we live our lives both personally and professionally. One of the many offshoots of the Internet has been the development of online shopping.

Online shopping is the modern version of the age-old mail order services that gave rise to such industry giants as Sears Roebuck. If you are scratching your head and saying “Sears and who?,” you are likely a member of the younger generation! Sears not only had a thriving mail order business, but also established itself as a brick and mortar retail giant across the land, becoming the largest retailer in the U.S.  by the mid-20th century. While many of us in the older generation mourn the loss of the Sears’ catalogs, they really haven’t disappeared… they’ve just morphed into electronic catalogs.

Harris Interactive, a leading custom market research firm, conducted an online poll in the fall of 2010, measuring the amount of time spent doing various activities online.  Nearly one-quarter of adults (24%) reported they have increased the amount of time they spend shopping online. The poll also revealed the increasing amount of influence online reviews and opinions shared through social media have on people’s decisions. But will all of this really make physical stores obsolete?

For years Sears Roebuck thrived in both its mail order and retail store businesses. One of the biggest changes affecting Sears, was not the advent of online shopping, but rather the mass migration of Americans moving out of city centers and into vast sprawling suburban regions in the post WW2 era. Businesses are constantly adapting to the changing needs and interests of their consumers. Online shopping is the latest revolution, but many believe it can and will continue to exist alongside traditional shopping outlets. Today’s retail giants such as Walmart and Target, tailor their services to meet the needs of both arm-chair shoppers and hands-on shoppers.

Take a look at the heat map below of the penetration of online shopping in the U.S. generated from one of our many databases in GeoMetrx. While online shopping clearly has a presence, and more strongly in some areas, it doesn’t appear as if retail businesses are going to be boarding up their storefronts any time soon. 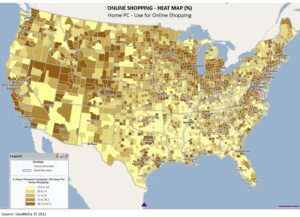