Pop vs Soda – A Soft Drink by any other name is…

A soft drink by any other name is… just as bubbly, or is it? 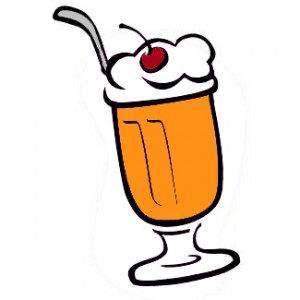 I remember a funny story my mother shared with me years ago. She and some college friends at a school in the upper Midwest stopped in at a local diner for lunch. One of her friends ordered an orange soda. The server dutifully jotted it down, but when she brought the orange soda to the table, the friend was stunned. There before her was a large glass filled with vanilla ice cream and an orange soft drink. It took a little bit of discussion to sort out the misunderstanding, which came down to a regional variation.  You see, her friend grew up on the East Coast where soft drinks are typically called sodas. In the Midwest, folks refer to soft drinks as pop, so had she ordered an orange pop, there wouldn’t have been a funny story to share! In the South, soft drinks are often referred to as cokes, no matter the flavor. If you want an orange soft drink while visiting there it is advisable to order an orange coke… seriously!

I recently came across a fun website, the Pop vs Soda Page, where this difference in word usage is being surveyed and mapped by Alan McConchie. Anyone visiting the site can participate by entering their hometown ZIP Code and selecting which version of the word they first learned to describe soft drinks. Here is a look at the most current map.

The actual website map is interactive and by mousing over the map you can view just the areas in which a particular word is most prevalent – Pop vs Soda vs Coke vs Other. A map for Canada is said to be coming soon. What do they call soft drinks in the Great White North?