Geography in the News: Space Taxis

The reality of vacations to outer space and checking in at a hotel on the moon is closer than one might think, though some of the first private businesses to operate in the ‘final frontier’ are likely to be International Space Station taxi services and those harvesting rare metals from asteroids. This past week marks a new and historic step forward in the exploration of space. As we speak, the first private spacecraft is preparing to link with the International Space Station. The unmanned SpaceX Dragon launched Tuesday, May 22nd, from Cape Canaveral, Florida. It is carrying a payload of 674 pounds of food, clothing and supplies, along with additional supplies for science experiments, cargo bags for future flights and computer equipment. After remaining attached to the space station for two weeks, it will return to Earth bringing with it science experiments, hardware and used gear.

What does this mean for the future? NASA Administrator Charles Bolden sees this is as a step toward a new future of private innovation in the space industry. It has taken more than six years of preparation to pave the way for commercial flights to link the space station. With the retirement of NASA’s space shuttle fleet last year, the US is dependent on the Russian space agency to transport U.S. astronauts and supplies to and from the space station. Bolden stated, “What’s really important is not control, as much as it is the fact that the United States will once again be in the lead, will be providing our own vehicles to take our own astronauts and cargo to the International Space Station. It’s fine to rely on partners, but that’s not where the greatest nation in the world wants to be.” 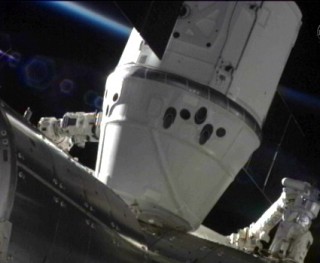 Backed by entrepreneur Elon Musk, the founder of PayPal, SpaceX is one of several companies receiving funds from NASA to develop a space taxi system. “I hope and I believe that this mission will be historic in marking that turning point towards a rapid advancement in space transportation technology,” said Musk. The company hopes to build a spacecraft to carry astronauts to Mars. Other companies participating in NASA’ Commercial Orbital Transportation Services program include Orbital Sciences Corporation, Blue Origin, Boeing, and Sierra Nevada. Another company, ATK (Alliant Techsystems Inc.) is developing plans to launch humans into orbit by 2015.

As private industries gain a foothold in the space program by providing cargo services to NASA, it allows them to fund projects with much greater goals including space ‘vacations’ for paying tourists, mining asteroids for rare elements, and even human colonization of space.  Celestis, Inc. has already found a business opportunity in space – for $2,995 families can launch 1 gram of the cremated remains of their loved ones into the universe. The rocket used to launch the SpaceX Dragon carried the remains of more than 300 deceased individuals into outer space on Tuesday. Among them were James Doohan, best known as Scotty on Star Trek and Gordon Cooper, one of the famous Mercury seven astronauts who was portrayed by Dennis Quaid in The Right Stuff.

To keep up with all the developments of the Dragon, visit NASA’s website.