The 1970s weren’t just disco balls and gas shortages. There was another movement on the horizon, the “38 States”, though it never did gain enough traction to take hold, but what if it had? What state would you be living in today? How would your business and territories be impacted?

C. Etzel Pearcy was a geography professor at California State University, Los Angeles back in the mid-70s. He proposed creating entirely new boundaries for the states and reducing them from 50 to 38 in the process, with all new names to boot. While the idea might seem ludicrous at first glance, and likely never to happen, it does make a lot of practical sense. 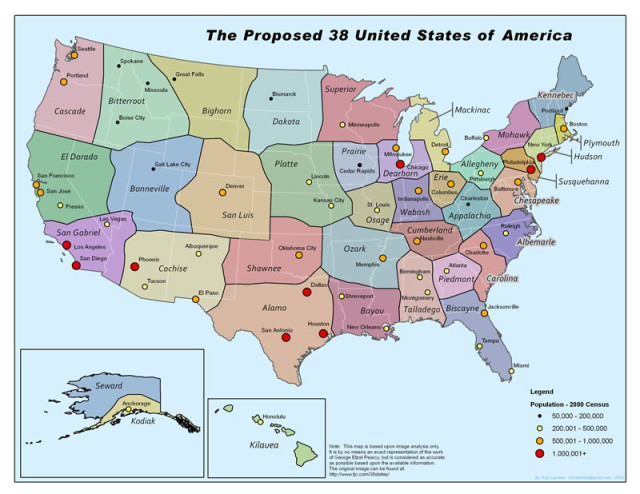 When this country was settled times were very different. Original state line boundaries were drawn using natural geographical boundaries such as rivers and mountain ranges. Others were decided by straightforward lat/long coordinates, hence the VERY straight lines between some states, especially out west when population was very sparse at the time of statehood induction for many.

A water source is one of the most fundamental needs of any settlement. Nearly every major city in the U.S. is situated on or near a river. As population has increased and automobiles and bridges have provided easier access to open land, major metropolitan areas have sprawled across state lines. In fact, 5 out of the top 10 urban areas span across multiple state lines:

Another 19 of the top 100 urban areas, 24 of 100 in all, do the same. For those that live and work in these areas, the challenges faced are all too well known. If you live in one state and work in another, income tax filing is a joy – NOT! State tax laws can vary widely as well, creating 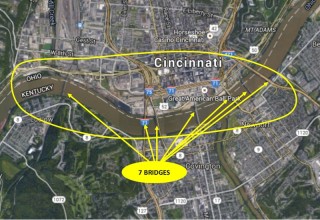 an enormity of economic advantages and disadvantages for local businesses. In New Jersey, there is no sales tax on food, clothing, household paper goods, medicine or gasoline (though there is a gasoline excise tax). Many New York residents will travel to New Jersey to purchase these goods. State governments must work together to manage the politics of myriad bridges (construction, maintenance, etc.) that are the lifeline of these areas. As evidenced by the Bridgegate scandal and the Bridge to Nowhere, disagreements can paralyze local economies.

If this movement were ever to gain traction, the new stateliness would likely require additional tweaking. Pearcy based his divisions on population density, transportation routes, geological features and, as much as possible, centered major metropolitan areas in the new states. The new state names would certainly be up for debate as well, as would be the new state capital selections. As unlikely as this change is, never say never, it’s not as crazy as it may sound!