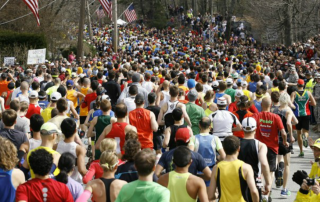 Our hearts and prayers go out to all those affected by the tragic events at this year’s Boston Marathon, as 2013 marked the 117th running of the world’s oldest annual marathon, and one of the most renowned races of all. Held on the third Monday in April, also known as Patriot’s Day in Massachusetts, the Boston Marathon is one of six World Marathon Major events which include: Tokyo, Boston, London, Berlin, Chicago and New York. The city,  participants, and fans of the sport vow to return in 2014, a sentiment echoed by President Barack Obama in his speech during the interfaith service held in Boston on April 18, 2013.

The hilly terrain and varying weather make the Boston Marathon course a challenge for both professional and amateur runners. The race begins in the town of Hopkinton, passes through eight cities and towns (Hopkinton, Ashland, Framingham, Natick, Wellesley, Newton, Brookline, Boston) and ends in the center of downtown Boston at Copley Square on Boylston Street; a location now woefully familiar to all around the world. The most challenging part of the course, Heartbreak Hill, faces participants between the 20 and 21 mile mark, just about the time in a typical marathon race that runners experience the phenomenon of “hitting the wall.” 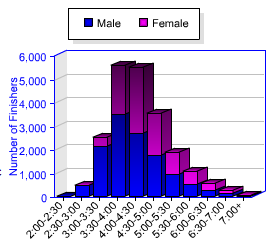 The average time to finish the race historically is just under 4 hours, although in 2012, the average time was 4 hours and 18 minutes. For more race results visit www.marathonguide.com. The first race held in 1897 sported just 18 runners. The event now has capacity for 27,000 participants, and has averaged more than 22,000 finishers annually in the last five years. The Boston Marathon was the first major marathon event to include a wheelchair division (1975). For more fun facts visit the Boston Athletic Association website.

A marathon is a daunting race; 26.2 miles is a lot of ground to cover on foot. Below is a map of the course, which still doesn’t put things in perspective. To get a better view of the course from end to end, check out the time-lapse video also shown below. Wow! Boston 2014!!!