Whether you tout the philosophy of the locavore movement or stand behind the economic theory of free trade, your defenders as well as your detractors will be on hand, ready and willing to share their opinion. Yet, no matter which side of the debate you are on, one fact cannot be denied – the locavore movement is growing, and the opportunties for entrepreneurs are ripe. Based on research conducted by the USDA Economic Research Service, the movement was estimated to have generated $4.8 billion in sales in 2008, and it is projected that locally grown foods will generate nearly $7 billion in sales in 2012.

It’s a movement that is gradually reshaping the economics of the agriculture industry and spurring a revival of small farms, something many thought would never happen. Prior to WWII, nearly two out of five Americans lived on farms and food was locally grown and marketed. Rarely was food transported further than a day’s distance. After WWII our infrastructure expanded greatly, transportation costs decreased and refrigeration became more accessible. These changes allowed meats and produce to be transported greater distances at competitive prices. The increasing eco-conscious focus on sustainability has fueled the locavore movement and caused a major shift in how food is being grown and sold in America.

The term locavore was introduced in 2005 on World Environment Day when four women in Northern California kicked-off a month-long dietary challenge “Celebrate Your Foodshed: Eat Locally”, and began calling themselves “locavores.” A locavore is someone who either exclusively or primarily eats foods from their local or regional foodshed. There is no single definition of what defines a local foodshed as distances vary regionally and are also impacted by population density; yet many locavores use a 100-mile radius as a general guide. Produce sold within 24 hours of harvest is usually considered local as well. In comparison, mass-market food items consumed in the U.S. travel an average of 1,300 to 2,000 miles from farm to store according to ATTRA – National Sustainable Agriculture Information Service.

Locavores have a wide variety of beliefs in support of the movement. In the minds of many, local foods are those that come from small farms that have developed social and economic relationships within the local community. A national study conducted by the Food Marketing Institute in 2009 uncovered the top three reasons for participation cited by consumers:

While pinpointing exactly how many people are joining the locavore movement is difficult, there are many signs that it’s gaining mainstream attention. Nearly 80% of respondents in a 2006 national survey said they occasionally to always purchased fresh produce directly from growers (Source: USDA, ERR-97 May 2010). Increased demand is creating opportunities for farmers and growers to expand their marketing channels. Local foods are being sold through farmer’s markets, roadside stands, winter markets, food co-ops, CSAs (community supported agricultural groups), supermarkets, specialty stores, restaurants, hospitals, schools and more.

There are numerous public programs and policies that support local food initiatives and provide financing for local food systems. An example is the farm-to-school programs in which some or all of the produce needs of the school cafeteria are met by nearby farms. The National Farm to School Network, which began with just a handful of farm-to-school programs in the late 90’s, and climbed to 1,000 in 2005, is now estimated to have reached 2,518 programs as of 2012.

Farmers Markets are increasing in numbers across the nation as well. According to the USDA, there were 7,175 farmers markets in 2011, a 17% increase from 2010. 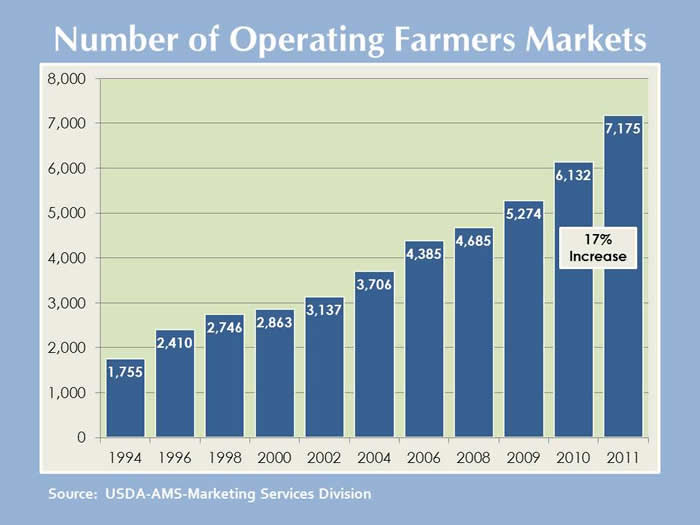 Large retailers are yielding shelf space to meet consumer demand for locally grown foods. Stores such as Walmart, Safeway, Meijer and Weis Markets are participating in local food initiatives. Local restaurants are meeting the demands of their patrons to provide local foods as well. According to a survey conducted by the National Restaurant Association, 89% of fine-dining and nearly 30% of fast food operators served locally sourced items in 2008; while both believed these items would become more popular, 90% and nearly 50%, respectively.

In St. Louis, Missouri an innovative partnership is bringing “Mobile Markets” to commuters using public transportation for the March-October growing season. Whatever the motivation of individual locavores, the movement is gaining momentum and the opportunities for entrepreneurs are ripe, whether choosing to enter the market by starting a small urban farm, becoming an intermediary, selling direct-to-consumer, or any of the other numerous entry points. As always, any market entry or expansion should be backed by thorough research to develop a solid strategy.