In the modern world we travel for two main reasons: business and pleasure. Traveling for business is more of a necessity, but why do we travel for pleasure? Again, there are two main reasons: escape and exploration. Escape travel allows us to leave behind our daily concerns and the demands on our time, clear our minds and simply relax in a completely disconnected location. You are imagining yourself lying on remote beach at a far-away resort right now, aren’t you? Aaaah, yes, so nice! Exploration travel, on the other hand, is still a form of escape, but a more active one. Humans, by nature, are a migratory species and while there are no new lands to be discovered for the first time, discovering them for ourselves is a visceral thrill.

Thanks to modern engine technology we can easily wake up in one place and find ourselves in another half-way around the world before nightfall as we outrun the sun and swap climates in a single day. With air travel becoming increasingly affordable* and online services allowing us to comparison shop for the best deals, our biggest challenge is not getting “there,” but rather deciding where “there” is going to be for our next trip.

So where are the trendiest places to travel? You may be surprised by the source of the answers to that question: MasterCard! Priceless, right? Okay, maybe you aren’t that surprised. The big credit card companies are not only financial giants, but data giants as well, though the company is using public data and not its own transactional data to compile its “MasterCard Index of Global Destination Cities.” The index, now in its fifth year of publication (July 2014) is compiled as follows:

The MasterCard Index of Global Destination Cities ranks cities in terms of the number of their total international visitor arrivals and the cross-border spending by these same visitors in the destination cities, and gives visitor and passenger growth forecasts for 2014. Public data are used in deriving the international visitor arrivals and their cross-border spending in each of the 132 destination cities, using custom-made algorithms; paying special attention to eliminate the hub effects for destination cities such as Singapore, Amsterdam and Frankfurt. This Index and the accompanying reports are not based on MasterCard volumes or transactional data.

The top 5 destination cities from the 2014 index are: 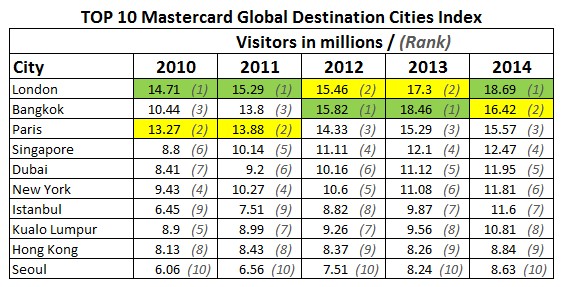