What? There is an association for counties in the U.S.? Yes, it’s true, there is! The National Association of Counties (NACo) is the only national organization that represents county governments in the United States. There are currently 3,069 counties in the U.S. which vary greatly in size, population and function. The smallest county (26 sq. mi.) is Arlington County, VA, and the largest (87,860 sq. mi.) is North Slope Borough, AK. Loving County, TX is home to the fewest residents at just 71, while Los Angeles County is home to more than 9.2 million people. Two states, Connecticut and Rhode Island, are divided into geographical regions called counties, but do not have functioning county governments. Alaska’s counties are called boroughs and Louisiana’s counties are called parishes.

All that said, I never really gave much thought to the formation, existence or varying roles of the counties within our 50 states. Not surprisingly, the county system can trace its roots to England, as our nation began as a British colonial holding, yet the word ‘county’ itself is from the French, comté, meaning domain of a count. In England, shires (i.e. counties) date back to 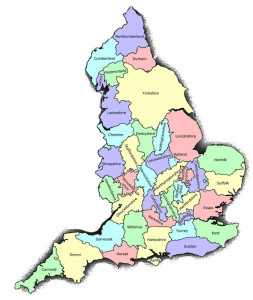 the Saxon settlements of the 5th century, and function as the administrative arm of the national government as well as the citizens’ local government. By the 11th century, each shire was ruled by a shire-reeve (sheriff), appointed by the crown. This structural form was adopted by the American colonists up and down the eastern seaboard, and then adapted to meet the diverse economic and geographic needs of each of the colonies. Our founding fathers did not provide for local government in the Constitution, and instead left that power to each of the states. Early state constitutions, for the most part, conceptualized county government as an arm of the state.

According to NACo: After World War I, population growth, and suburban development, the government reform movement strengthened the role of local governments. Those developments set the stage for post World War II urbanization. Changes in structure, greater autonomy from the states, rising revenues, and stronger political accountability ushered in a new era for county government. The counties began providing an ever widening range of services. These trends continue apace today.

Just for fun, we’d like to share the following 30-second video animation which depicts the development and changes of historical county boundaries from 1629-2000. Enjoy!