In 2011, the US turkey industry raised 248.5 million turkeys and earned nearly $5 billion in gross farm income. The same number of turkeys is expected to be raised in 2012 as well. The U.S.  is the biggest consumer of turkey. Last year the average amount of turkey eaten per person was 16.1 lbs. Dating back to 1970, nearly half of all turkey was consumed during the holidays; today that number is just 31%. The industry has greatly expanded turkey processing, providing a wider variety of cuts and parts, thus making it easier for consumers to enjoy turkey year-round.

Turkey is now the fourth most common protein choice in the U.S. The top three meats per capita consumed in pounds are:

Our Canadian neighbors to the north are the next biggest turkey fans, consuming 9.2 lbs. per capita, followed by the European Union at 7.9 lbs. per capita. The U.S. exported more than 300,000 tons of turkey in 2011, valued at $599.5 million, an increase in value of 29% from the prior year.

The top turkey producing states are: 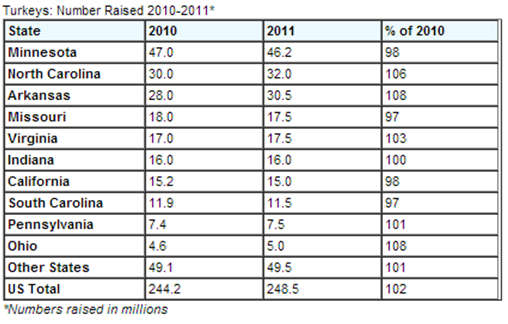 The map below, from the 2007 USDA Census of Agriculture depicts the location of turkey farms in the U.S.:

For more information about turkey production in the U.S., please visit the National Turkey Federation website.