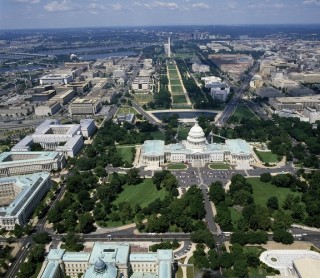 Washington, D.C. is one of the most unique jurisdictions in our country. The District of Columbia, our nation’s capital, has a population of nearly 660 thousand and encompasses 68.3 square miles. It is situated on the northeast bank of the Potomac River and borders the states of Maryland and Virginia, both of which originally donated land to form the new capital. Ironically, even though the district is home to all three branches of our federal government, the residents have virtually no representation. That’s right, the district has no representatives in the U.S. Senate, and only one non-voting congressional delegate in the U.S. House of Representatives. At least it has 3 electoral votes in presidential elections thanks to the 23rd Amendment (1961). For the record, the population of the district is greater than the states of Wyoming at 584 thousand and Vermont at 626 thousand.

The District of Columbia was established as the nation’s capital in 1790 by the Residence Act which gave George Washington the authority to select a 100 square mile site on the Potomac River between Alexandria, VA and Williamsport, MD. Washington selected the southernmost location within these limits which incorporated one of the busiest ports of the day, Old Town Alexandria. The original boundary of the District of Columbia was in the shape of a diamond, each side measuring 10 miles long. About two-thirds of the area was situated on the northeast side of the Potomac, land that had been part of Maryland, with the balance on the southwest side of the river, land that had been part of Virginia.

Taking a look at the modern boundaries of Washington D.C., it is clear only the portion of land in Maryland constitutes the district today. So what happened? In 1846, the portion of Virginia that was ceded from the state to create the District of Columbia, was retroceded back to the state. Why? It was all about the slave trade. Southern congressmen wanted to protect Alexandria, the center of slave trade in the region at the time, from growing pressure to ban slavery in the capital. It would take nearly another two decades before it was banned.

Despite all this region went through in the Civil War and the ensuing century and half that have since passed, the original boundary is still well-marked. Between 1791 and 1792, the boundary lines were carefully surveyed and stones were placed one mile apart along the entire length, ten stones on each line. There were 14 stones placed along the Virginia borders and 26 along the Maryland borders. The stones were inscribed with “Jurisdiction of the United States” and a direction mile marker on the side facing the district. Factoid: the stones are the oldest federal monuments.

Amazingly, 36 of the 40 stones are still standing today at or near their original locations despite severe damage and weathering to most. The fate of other four stones varies: SW2 is represented by a substitute stone; NE1 is represented by a plaque; SE4 is in storage after it was knocked down by a truck in the mid-1980s; and SE8 is lost, but a substitute stone is also in storage. In 1978, a local Boy Scout led a service project to clean-up the sites and repaint any fences. Since then, the Daughters of the American Revolution, along with a host of other organizations, government agencies and professional associations have continued the preservation efforts.

Now for you history and map buffs, here is a link to a great website (www.boundarystones.org). This organization has marked the location of each stone on a Google Map and linked the locations to a picture and a shortcut zoom to street level. Additionally, at the bottom of the web page is a complete list of the location directions for each stone along with some fun facts about each. And for the truly adventurous, on September 19, 2015, the 3rd annual boundary stone bike ride will be held, an approximately 60 mile urban ride with stops at each of the stones along the way. Enjoy! 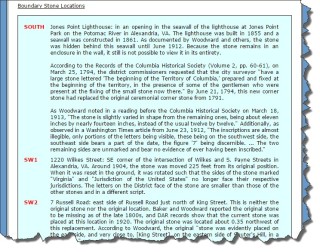 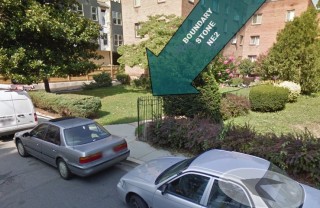