Where Does All the Snow Go? Snow Removal in Big Cities

Where Does All the Snow Go?
Snow Removal in Big Cities 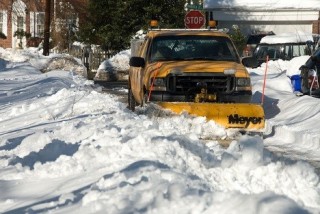 In towns and cities across the U.S. with annual snowfall, snow removal is the norm. Methods vary depending on volume and location. In the suburbs, snow removal mainly involves plowing snow into piles along curbs and other open areas as space allows. In downtown areas, where streets are narrower, snow often has to be loaded in a dump truck and hauled away, especially after larger storms. Piling up the snow along city streets creates major problems for pedestrians and traffic. Therefore, cities utilize every open space possible from empty lots to parks to ditches. The city of Boston has several very large open areas at its disposal which have become known as “snow farms” in the winter. The snow eventually melts away on its own, though the last remnants can often exist deep into spring. But what do cities do when they get more snow than they can remove?

This past winter, northeastern cities were slammed with one large snowstorm after another, and even the “snow farms” became full. Some cities, when desperate, dump snow into local rivers and harbors. However this is not an environmentally sound option, because salt and other pre-treatment chemicals are dumped into the water as well as vehicle fluids and various debris. For many cities, before removal companies can dump snow in rivers, harbors or the ocean, permission has to be granted by the local conservation commission, or similar, which can be a challenging process.

What else can be done? Some have suggested loading it on train cars and hauling it to California where they are in need of water. Hmmm, interesting, but probably not very practical. Well, there is one more alternative available, bringing in snow melters. At the core of these machines is a burner which keeps water heated in a tank, thus melting the snow. The melted snow then passes through several filters to catch oil and debris before being directed into storm drains. While these machines are not cheap, ($200,000-$300,000), they have proven to be a worthwhile investment for some snow and ice management companies, especially those who are able to service several northeastern states. The greatest demand is in the major cities and the equipment can easily be redirected in anticipation of large snowfall events.