Whenever we come across a really cool map, we love to share! Today’s share comes to us from National Geographic. What’s particularly cool about this map is the amount of information you can gather in just a quick scan:

1 – Where are the 7 billion people in the world living?
2 – How many people are in any given geographical region?
3 – What is the average per capital level of income? 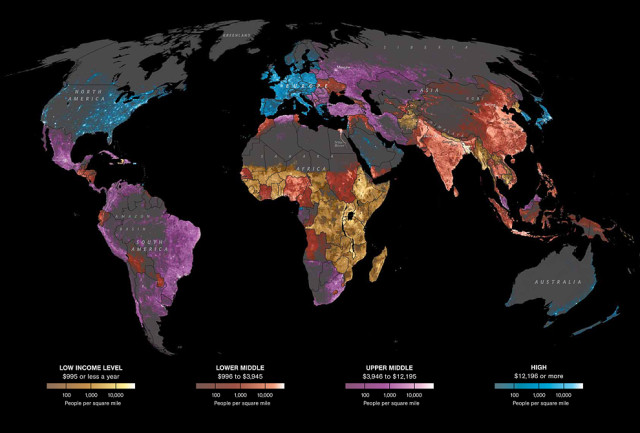 If at first you are thinking where is the data for the gray areas, think again! It’s an amazing perspective of just how much surface area of the earth is unoccupied by humans! The whole upper region of Africa? That’s the Sahara Desert – not very hospitable to people! In Australia, almost 90% of the population lives in urban areas along the coastlines. Less than 1 million people live in the harsh regions of the Outback, which includes most of the continent. Looking north, Siberia accounts for 77% of Russia’ land area, but is home to just 27% of its population (40 million), most of which are located along the southern perimeter of the region. The northern regions of Canada are equally void of human population.

The color-shading for each county on the map depicts the distribution of wealth per capita based on average annual gross national income (see note below picture). The brighter the color, the greater the population density. And yes, that is Equatorial Guinea you see on the west coast of Africa shaded in blue, the highest income grouping. The discovery of large oil reserves in 1996 has led to the country’s rapid economic growth and government income. It is now the third-largest Sub-Saharan oil producing country in Africa. However, don’t be fooled, more than 3/4th of the population subsists on less than two dollars per day according to the Center for Global Development (www.cgdev.org)

In addition to the map shown above, National Geographic has compiled many additional economic and demographic statistics by the same average annual gross national income classification. We encourage you to follow this National Geographic link and explore this wealth of data for yourself.