On March 24, 1989, exactly 25 years ago today, the Exxon Valdez struck a reef in the Prince William Sound in Alaska. More than 11 million gallons of crude oil spilled into the pristine water. It was the largest oil spill in the U.S. at the time. The disaster had far-reaching effects. With fishermen no longer able to practice their livelihood and local businesses going bankrupt, drug and alcohol abuse, domestic violence and depression dramatically increased in Cordova, the hardest hit town in the aftermath of the disaster. While economically things are better, the environmental recovery is still incomplete. Local resident Michelle O’Leary reminds us “there’s no way to put the oil back once it spills.” (Source: NPR)

Just this weekend, on Saturday, March 22, 2014, a barge carrying nearly 1 million gallons of marine fuel oil collided with a ship in Galveston Bay. The shipping channel was closed between the bay and the Gulf of Mexico, backing up ship traffic as far as the eye could see and bringing business to a halt. How much of the especially heavy, sticky oil from the collision has leaked into the bay is not yet known. Any oil spill, no matter the size is an environmental and economic disaster. How much is 1 million gallons of oil? Well, for comparison, an Olympic size swimming pool holds approximately 660,000 gallons!

Largest oil spills in the world: 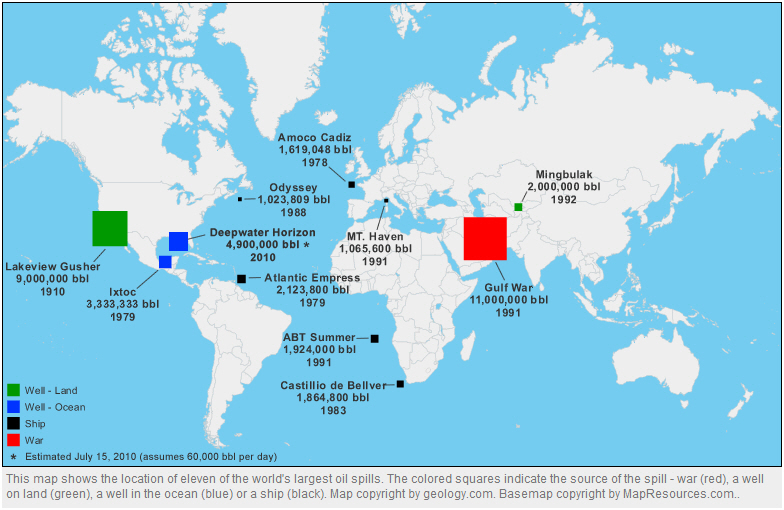 The Exxon Valdez does not even make this list based on quantity of oil spilled, however, the environmental impact was by far the most damaging of all time affecting more than 1100 miles of coastline.